When Minnesota State Trooper Zachary Hill got to the scene of a vehicle fire Sunday and heard that a man had rescued another motorist from the burning SUV, he “just assumed” the good Samaritan had opened the door.

Then Hill got a look at the door.

“He bent the door in half,” the astonished trooper said Monday. “I don’t think I could take a crowbar and fold the door like he did,” Hill said, adding that the feat took “superhuman strength.” 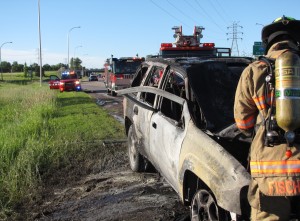 But the quick-acting motorist who pulled Michael Johannes, of Minneapolis, to safety along Interstate 35W in New Brighton Sunday said he has no idea how it all happened. He’s just glad he could help.

“I don’t know,” said Bob Renning, 52, when asked how he bent a steel door far enough to shatter the window and pull Johannes free. “I have no clue.”