Oh, really? And what do they hope to find… 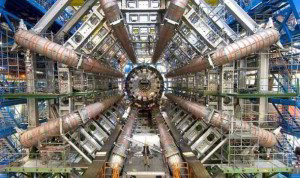 If successful a completely new universe will be revealed – rewriting not only the physics books but the philosophy books too.
It is even possible that gravity from our own universe may ‘leak’ into this parallel universe, scientists at the LHC say.
The experiment is sure to inflame alarmist critics of the LHC, many of whom initially warned the high energy particle collider would spell the end of our universe with the creation a black hole of its own.

The Large Hedron Collider will be turned off after February 2013, for two years of “maintenance” and “upgrades”.

“Although the LHC will not be running after February 2013, CERN certainly will. The whole accelerator chain will undergo maintenance, ready for running at a higher energy in 2015. Projects such as the Compact Linear Collider and High Luminosity LHC are already working on next-generation technology for future accelerators and detectors.” [source]

“The Large Hadron Collider will go into a long shutdown early next year to allow scientists and technicians to prepare it for higher collision energy in 2015.
It has been running at 7 TeV; scientists plan for it to reemerge at upward of 13 TeV. Beginning in February of 2013, highly coordinated teams will spend 20 months preparing its equipment for the change.” [source]

Very curious indeed, because this is around the time that we could see the start of the “Global Coastal Event” time period (as discussed by Clif High), and it is also the start of huge planetary events, as found by the Farsight Institute in their remote viewing experiments. If a thunderstorm is coming your way, turn of your tv. Or there will be “other” experiments that will not be published.