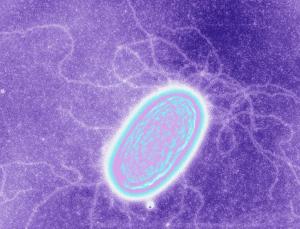 Unlike any other life on Earth, these extraordinary bacteria use energy in its purest form – they eat and breathe electrons – and they are everywhere

STICK an electrode in the ground, pump electrons down it, and they will come: living cells that eat electricity. We have known bacteria to survive on a variety of energy sources, but none as weird as this. Think of Frankenstein’s monster, brought to life by galvanic energy, except these “electric bacteria” are very real and are popping up all over the place.

Unlike any other living thing on Earth, electric bacteria use energy in its purest form – naked electricity in the shape of electrons harvested from rocks and metals. We already knew about two types, Shewanella and Geobacter. Now, biologists are showing that they can entice many more out of rocks and marine mud by tempting them with a bit of electrical juice. Experiments growing bacteria on battery electrodes demonstrate that these novel, mind-boggling forms of life are essentially eating and excreting electricity.

That should not come as a complete surprise, says Kenneth Nealson at the University of Southern California, Los Angeles. We know that life, when you boil it right down, is a flow of electrons: “You eat sugars that have excess electrons, and you breathe in oxygen that willingly takes them.” Our cells break down the sugars, and the electrons flow through them in a complex set of chemical reactions until they are passed on to electron-hungry oxygen.

In the process, cells make ATP, a molecule that acts as an energy storage unit for almost all living things. Moving electrons around is a key part of making ATP. “Life’s very clever,” says Nealson. “It figures out how to suck electrons out of everything we eat and keep them under control.” In most living things, the body packages the electrons up into molecules that can safely carry them through the cells until they are dumped on to oxygen.

“That’s the way we make all our energy and it’s the same for every organism on this planet,” says Nealson. “Electrons must flow in order for energy to be gained. This is why when someone suffocates another person they are dead within minutes. You have stopped the supply of oxygen, so the electrons can no longer flow.”

The discovery of electric bacteria shows that some very basic forms of life can do away with sugary middlemen and handle the energy in its purest form – electrons, harvested from the surface of minerals. “It is truly foreign, you know,” says Nealson. “In a sense, alien.”