NASA’s Interstellar Boundary Explorer, or IBEX, recently mapped the boundaries of the solar system’s tail, called the heliotail. By combining observations from the first three years of IBEX imagery, scientists have mapped out a tail that shows a combination of fast and slow moving particles. The entire structure twisted, because it experiences the pushing and pulling of magnetic fields outside the solar system.

Dr Ken Johnston worked for NASA and witnessed the retouching of lunar photograps, removal of artifacts and “stripping” as it was called of all anomalies found on pictures taken by Apollo missions. 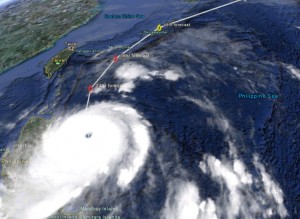 “Super Typhoon Songda strengthened into a Category 5 tropical cyclone. The powerful storm is forecast to now harass Taiwan and then set its sights on Okinawa, Japan.
The Joint Typhoon Warning Center (JTWC) said that Songda was now packing winds of over 161mph. Known as Chedeng in the Philippines, the storm was 275 miles east-northeast of Manila and moving to the northwest at 9mph. Songda reaches super typhoon strength, sets its sights on Taiwan and Okinawa – National Natural Disasters Source: examiner.com

“Typhoon Songda became a Super Typhoon in the evening on May 26, 2011 (Eastern Daylight Time) was it reached a Category 5 status on the Saffir-Simpson Scale. NASA satellite data shows that the monster storm with a 14 mile-wide eye has weakened due to adverse wind conditions today and is still a powerful Category 4 typhoon.
The Atmospheric Infrared Sounder (AIRS) instrument on NASA’s Aqua satellite captured an infrared image of Super Typhoon Songda on May 27, 2011 at 5:05 UTC (1:05 a.m. EDT). At that time Songda was a Category 4 storm. The infrared image showed a large area of very strong thunderstorms with heavy rainfall surrounding the eye of the storm. The eye is almost 14 miles (12 nm/22 km) in diameter and those thunderstorms were dropping rainfall as much as 2 inches (50 mm) per hour.
On May 27 at 1500 UTC (11 a.m. EDT), Typhoon Songda’s maximum sustained winds were near 125 knots (143 mph/231 kmh) down from its peak of 140 knots (161 mph/260 kmh) which it reached late on May 26. Sondga has tracked north-northwest but is expected to turn to the north-northeast. ” Source: NASA 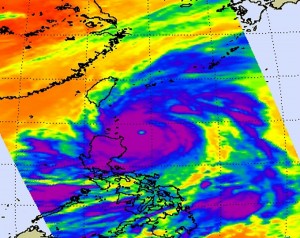