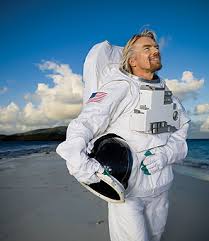 Billionaire entrepreneur Sir Richard Branson announced on CNBC’s “Squawk Box” Friday that his commercial space flight venture will accept bitcoin as payment. He called it “a new exciting currency.”
Virgin Galactic accepted its first purchase with bitcoin from a flight attendant in Hawaii. Branson—an early bitcoin investor himself—said the woman made “quite lot of money getting into bitcoin early on.” He said she paid in bitcoin, which was transferred into actual dollars “so there’s a fixed price … [and] we can actually pay her money back, if she changes her mind about going to space in a few months.” If Virgin Galactic didn’t have a refund policy, it might be willing to take the risk on a pure bitcoin transaction, he said. The cost in U.S. dollars to book a space flight is $250,000. [Source]